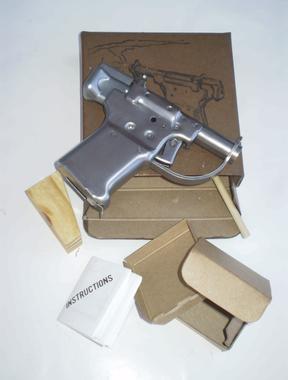 The original FP-45 is a clever and efficiently designed weapon but it has never received any accolades for operational safety.  Once it is loaded, the only safe way to handle it is with the zinc cocking piece turned fully 90 degrees to the right or left so that the rear corner of the pistol’s grip frame will prevent it from rotating into firing position.  If the cocking piece is re-aligned and the guide pin inserted through the hole in the cover slide as illustrated in the original instructions, THE PISTOL IS COCKED AND READY TO FIRE.  IF DROPPED IN THIS STATE, IT COULD DISCHARGE CAUSING INJURY OR DEATH.   Some worn original guns will have no mechanical means to hold the zinc cocking piece securely in the safe 90 degree position because the bottom of the firing pin boss is worn off from repetitive careless scrapping across the steel frame.  There is no safe way to handle these pistols.   A loaded pistol should never be un-cocked by lowering the zinc cocking piece when it is aligned in firing position.  To do so would place the firing pin, under spring pressure, directly on top of the primer of the chambered cartridge.  IF THE PISTOL WAS JARRED OR DROPPED IT IS HIGHLY LIKELY TO DISCHARGE.

The New Vintage Ordnance Co. FP-45 Liberator Pistol was the most widely produced and distributed clandestine weapon of all time yet virtually none survive.  Now, the nearly impossible hole in every WWII military pistol collection has finally been filled by VINTAGE ORDNANCE CO. LLC.  For the first time collectors can own a superbly precise reproduction complete with packaging & instructions, for a fraction of the $2500-$5000 cost of the ultra-rare original.  (It is estimated that fewer than 300 boxes survive making them even rarer than the pistol itself.)  Our replica is copied from the original plans and corrected against the actual pistols. The existing plans are not correct and this is not uncommon with wartime designed materiel.  Inconsistencies between the finished product and the plans are typically due to the urgency of production.  Often design adjustments were made on the factory floor and never recorded on the drawings.

VOCO's reproduction has a rifled barrel and discrete markings to comply with Federal law and hopefully prevent it from being unscrupulously sold as an original antique. We mark the serial number on the front of the grip frame and our company information, model and caliber designation on the underside of the barrel behind the trigger guard.  All characters are the minimum 1/16” high.  Not readily apparent are the superior quality steels, heat treating and tighter tolerances of our reproduction.  We have crafted the barrel, tube strap (breech ring) and cover slide (breech block) out of 1050 medium carbon cold rolled steel for greater strength.  We have tightened the chamber tolerances to meet commercial standards and address the terrible headspace problems of the original guns that allowed them to batter themselves apart under repeated firing.  Our zinc cocking piece is cast from a denser alloy than the original for greater strength.  Throughout we used close tolerance strip steels instead of cheaper commercial quality steel to insure the parts stayed as close as possible to the original specifications.