Many surviving FP-45 Liberators are missing the snap cover that caps off the ammunition storage compartment in the grip frame.   (Because of this we made some extra ones.)   Part of the problem lay in the material they are made of.  The plans called for half-hard tempered material.  They were not springs.  You bent them into place and bent them open.  This is why many of the ones that survive are really bent up.    If you don’t bend the tab over the front of the grip enough, it could easily get knocked off.  To minimize the bending and preserve the integrity of the snap cover, push it straight backward in its channel as the illustrations in the original instructions show.  It does not take much force to push the little bent tab rearward away from the hump.  The metal will flex enough to slide right over it and still retain enough elasticity to stay in position when you slide it back on.  Do not pull the tab downward, away from the butt, and slide it forward in an attempt to get the tiny stamped out retaining tongue behind the tab over the front hump of the grip frame.  This puts a great deal of bending stress on the tab and the middle of the part, bending the former up badly and the latter like a banana.  The result is a once beautiful part is now deformed and ugly and won’t stay on anymore.   At least when it falls off and gets lost you won’t have to endure the hideous sight of it anymore.  If you mess it up we do have extras.

The first six cartridges point front in the front of the compartment.

of surprise.   When there are fewer than ten rounds in the compartment, they really begin to move around and there is the possibility that one might detonate the primer of another, especially under the pistol’s heavy recoil. DO NOT CARRY OR FIRE A LIBERATOR PISTOL WITH LOOSE AMMUNTION IN THE COMPARTMENT. 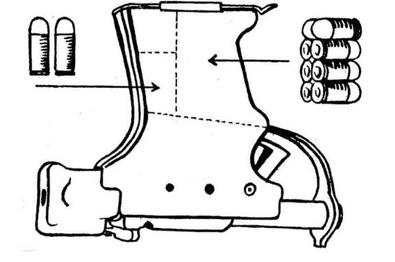 The next two cartridges are dropped into the gap at the back of the compartment primer down.

The last two cartridges lay on top of the first in the front of the compartment but oriented with the bullets facing the rear so their orgives will allow the necessary clearance for the snap cover to slide over them.